With Willach into the 21st century 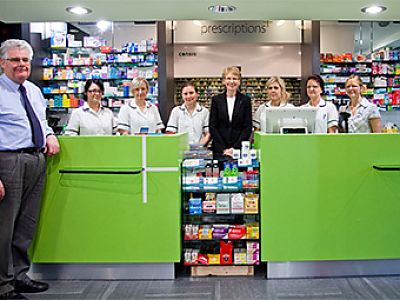 For countless decades, robots have both fascinated us and instilled fear in us. I'm not talking about the kind of robots that we see onscreen on programmes such as Doctor Who and Transformers (although it has to be said that they are terrifying), I am talking about robotic machinery that many fear could destroy small businesses and even force job cuts.

However, Peter Buckley Limited's newly relocated pharmacy in Clitheroe provides living proof that robots can have a positive impact on family-run businesses. When the Pharmacy moved to the site of the old Threshers store on King Street, the owners knew that it provided them with the perfect opportunity to not only have larger premises in a more centrally located position, but also to upgrade their systems and implement new procedures – mainly the installation of a German-made, state-of-the-art Consis Label Master.

Peter had been investigating the Consis Label Master – a robotic prescription dispenser – for five years, analysing its impact on other pharmacies on the continent. He discovered that the robot could make his employees' jobs easier and significantly reduce their customers' waiting times, while still allowing his staff to maintain a personal, face to face service. Since the robot was installed in the new Peter Buckley shop in October, it has certainly attracted a lot of attention. Some people have even been known to stay in the shop longer than they need to just to watch the mechanical arm reaching toward the vending machine-style slots and selecting the required prescriptions.

As Peter predicted, the robot has served to increase the pharmacy's productivity, meaning that in complete contrast to the fear of job losses through robotics, it has in fact allowed them to create a full-time position in the place of a part-time position and they are also currently in the process of recruiting a brand new member of staff.

The modernisation, which allows Peter Buckley's new pharmacy to stand out from its competitors, does not distract from the personal service and commitment it gives to its customers. The ethos of the business is, and always will be, to put its customers' needs first. There are five dispensing points, two completely private consultation rooms, a telephone headset system, which allows for a peaceful environment, and a spacious shop, designed by award-winning designer Keith Anderson, which stocks everything that you would expect from a good pharmacy. Peter Buckley also operates a prescription collection and delivery service. This allows customers to opt for their prescriptions to be collected from their doctor's surgery and then either be picked up from the pharmacy or delivered to their home address, and is a service that has proven to be particularly helpful to the elderly or infirm.