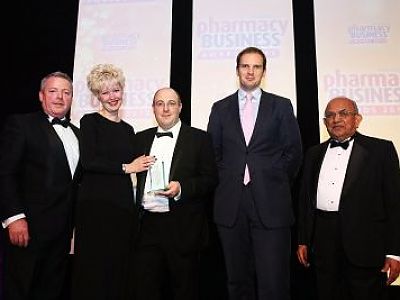 The Pharmacy Business of the Year Award 2013 went to Abbey Pharmacy in Rotherham, whose owners Andrew and Sally Porter battled back against the odds following a serious fire at the pharmacy in 2011. Having endured an eight-month struggle to get their business reopened, they took the bold step to invest in an exclusive refurbishment, resulting in a stunning, modern pharmacy offering what one awards judge described as "exemplary community healthcare," underpinned by clinical excellence and state-of-the-art technology by WILLACH PHARMACY SOLUTIONS. "I'd say to anyone out there who is facing difficult times or bad times to never give up. You've just got to keep going and only by doing that will you get to where you want to be," Andrew said, standing next to his wife and proudly clutching the winning trophy. Abbey Pharmacy works with a CONSIS.B3 robot from Willach. The concept is based on the WILLACH TRIANGLE WORKFLOW dispensary model.

Learn more about modern pharmacy design and efficient workflow management and take a look into the Abbey Pharmacy Case Study.